Though auto safety improves as technology advances, thousands of people still sustain injuries or die because of the failure of auto manufacturers to fully ensure the crashworthiness of their vehicles. From an engineering perspective, crashworthiness is the ability of the vehicle to prevent occupant injuries in the event of an accident. 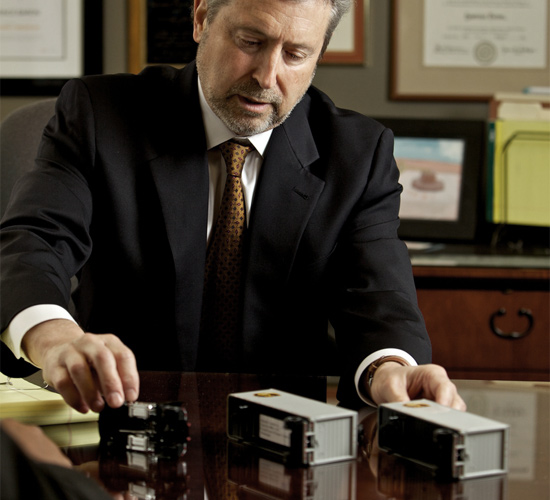 Crashworthiness deals primarily with the 'second collision' in which the driver and passengers collide against the interior of the vehicle. Most Americans are familiar with the more notorious vehicles, such as the Pinto, but few realize the nature and scope of the problem. Millions of defective vehicles remain on America's roads, capable of causing death and severe injuries in otherwise survivable accidents.

Baron Law Firm’s work in the automotive crashworthiness field was acknowledged by Trial Lawyers for Public Justice, a national public interest law firm, who awarded Lawrence Baron with its most prestigious national trial lawyer of the year award.

Baron Law Firm’s work in airbag injuries was also acknowledged by dateline NBC.  In fact, the National Highway Traffic Safety Administration (NHTSA) accepted information from Lawrence Baron that ultimately led to the recall of the passenger airbag in 1994 and early 1995 Nissan Altimas.

Since the mid-90s, Lawrence Baron has been the lawyer at the forefront of efforts to recall defective passenger air bags in 1994 and 1995 Nissan Altimas.  Baron became familiar with the dangers of air bags and the injuries they cause by litigating several air bag lawsuits against Nissan.  Baron shared his own files on air bag injuries with the federal agency NHTSA to help document the product defect.

On April 24, 2003, Nissan announced a program to recall the Altimas and replace their defective device.  Despite the recall, many of the offending Altimas are still and the road and Baron is still receiving Nissan air bag injury cases.

Child safety seats are notorious for having manufacturing problems or being incorrectly installed in the cars to begin with. These malfunctions have led to a rash of injuries and deaths around the country. Because parents and drivers are required to have these special seats in their cars, the potential for danger can also increase if certain measures are not taken beforehand.

Defective seatbelts cause an alarming number of injuries every year because manufacturers fail to properly test and monitor the products that they produce. Manufacturers are responsible for producing functional and safe seatbelts. If seatbelts have not been properly made, they may not buckle correctly or may release during collision. While the use of seatbelts does not guarantee that the passengers of a car involved in an accident will be free from injury, it significantly reduces the chance of being seriously injured.

Depending on the type of collision that occurs, injuries may range from minor cuts and bruises to more serious injuries, such as brain damage, severe cuts, loss of limbs, broken bones, and even death.

A rollover is a crash in which the vehicle revolves at least one-quarter turn, regardless of whether the vehicle ends up laying on its side, roof or even returning upright on all four wheels. Rollovers occur in multiple ways. Most rollovers are "tripped," that is the vehicle rolls over after leaving the roadway striking a curb, soft shoulder, guardrail, or other object that "trips" it. A small percentage of rollovers are caused by events are "untripped" and caused by tire defects. Rollover crashes are infrequent, but dangerous events. The 2001 Fatality Analysis Reporting Systems (FARS) tells us that over 10,000 individuals were killed as occupants of light vehicles in rollover crashes. Of those, about 8,400 were killed in single-vehicle rollover crashes. Rollovers in SUVs are the leading cause of severe injury and death to their occupants. Likewise, rollovers are the leading cause of death to pickup truck occupants.

More than 10,000 people a year are killed in rollovers. The best way to prevent the deaths is to keep vehicles from rolling over in the first place. Electronic stability control is significantly reducing rollovers, especially fatal single-vehicle ones. When vehicles do roll, side curtain airbags help protect the people inside, and belt use is essential. However, for these safety technologies to be most effective, the roof must be able to maintain the occupant survival space when it hits the ground during a rollover. Stronger roofs crush less, reducing the risk that people will be injured by contact with the roof itself. Stronger roofs also can prevent occupants, especially those who aren't using safety belts, from being ejected through windows, windshields, or doors that have broken or opened because the roof has deformed.