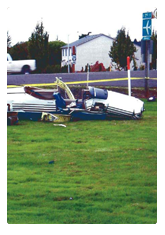 BaronLawFirm was particularly grateful to represent Justin Brown and his family.    On October 15, 2005, Justin Brown suffered catastrophic injuries including paraplegia when an airplane he rented from Sportsman Airpark crashed.  The crash occurred because the carburetor failed and flooded the engine during practice takeoffs and landings.  After the crash, we learned the carburetor had not been overhauled in over 15 years, despite manufacturer instructions that it be overhauled at least every 10 years.  The case was actively litigated with numerous successful motions and hearings.  Ultimately, all defendants chose to settle the case, resulting in a meaningful settlement for Justin Brown and his family.