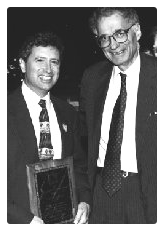 "I never thought I would win," says Baron, 47, who was honored for forcing General Motors Corp, to settle a product liability case.

Baron and Seattle co-counsel Paul Whelan won a confidential out-of-court settlement for Madras resident Anne Kirkwood, who was critically burned when a GM truck with a sidesaddle fuel tank swerved into her lane and exploded on impact.

Before Baron even filed his $263 million lawsuit, he and a lobbyist had to sell the Oregon Legislature on an exemption to a state law governing product-liability lawsuits.

The Washington, D.C. based Trial Lawyers for Public Justice, meeting July 22 in San Diego at its 15th annual convention, honored Baron over nine other finalists from Los Angeles to New York, Miami to New Hampshire.

Baron took on a case that virtually no one else would have pursued, the trial lawyers group said. The award is given each year to the trail lawyer or firm with the "greatest contribution" to the public interest by winning or settling a precedent-setting case.

"Lawrence's work on this case illustrates the ability of trial attorneys to bring justice to those who need representation to fight the most powerful and wealthy corporations in this country," says William Snead, the group's outgoing president.

A practicing attorney for 22 years, Baron says the GM settlement gave him extra satisfaction because he is a Detroit native. GM is based in Detroit.

He has joined a cadre of plaintiff's attorneys nationwide who contend that GM full-size pickups from 1973 through 1987 are prone to explode from side-impact accidents.

GM Lawyers deny the accusation but have settled more than 200 cases.

"They're absolute firebombs," Baron says. "I don't know how GM executives sleep at night, justifying keeping these vehicles on the road."