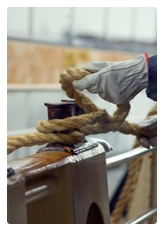 Robin Gaussoin was a deckhand on a tugboat that was hired to move a naval vessel from a dock. To tie up to the vessel, a line was pulled 40 feet up from the tug's deck to the ship's. In the process, the line broke and tumbled down, striking Gaussoin on his back and resulting in injury. Baron filed suit against Gaussoin's employer and a shipyard that was repairing the naval vessel and that supplied the line. Through scientific testing, Baron proved the line to be defective and a verdict of $1.6 million dollars was returned by a jury. The jury verdict was appealed and was upheld by the Oregon Court of Appeals. 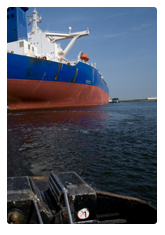 Scott Nelson was a first mate on a vessel taking soundings for oil off the coast of Texas. He severely injured his lower back when a supply boat was brought out to physically hand off large boxes of groceries to the crew. Standard and safe procedure required that loading either be done at the dock or with the assistance of a crane. A jury returned a $960,000 verdict in Nelson's favor. The amount was reduced to $700,000 because of a small percentage of negligence attributed to Nelson.